Doorstep HFP provides homeless families, living in temporary accommodation in the London Borough of Camden, with access to local services that make sure adults, children and young people all secure the emotional and practical support they require to underpin a good quality of life. 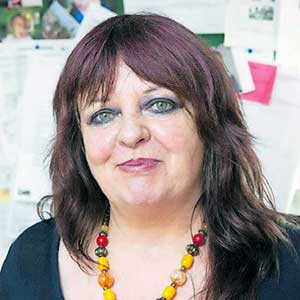 VAC helps puts us in a better position to deliver services. It’s a good resource for information and making us aware of changes as they happen and the forums allow us to raise issues and give us a voice and articulate what our needs are. That’s not an easy thing to get organisations and people to do.

Q. How did you first hear of VAC?

Our relationship with VAC goes back to the beginning of Doorstep. Previously we were known as the Adelaide Road Homeless Families Project and we provided services to 28 local families living in temporary accommodation. Then in 1989 we moved to Broadhurst Gardens in the basement of one of Camden’s largest hostels for homeless families. The name Doorstep was chosen to reflect the project’s accessibility to families living in temporary accommodation in the area.

In 1990 we became a registered charity, an independent organisation in our own right, but up until that point we had been under the umbrella of VAC. So that was our first association.

So we became an independent organisation and renamed Doorstep. But the relationship didn’t end there. We were very grateful for the support and expertise we have received from VAC. It came in different forms really. For a start VAC does our payroll which is a great help to us because for small charity organisations it’s such a time consuming task. To have that particular aspect taken off our back is an enormous thing.

VAC has also provided various relevant training which has enabled us to be kept up to speed with all the changes that have happened over the years. They’ve provided training not only for our staff, but for our trustees as well. The training has been for a broad range of activities, delivering services and so on but also many organisational aspects and legal requirements. It’s been invaluable over the years.

VAC also provides various forums –the homelessness forum being one – and those have been helpful and supportive because you get to meet other people in the field- people we wouldn’t have got to meet otherwise. We’ve been able to support one another and the forums have also been a good place to influence policy.

VAC has been an employment advisor as well which has helped me so many times. For instance in 2007 we took a huge cut in our funding and we were facing closure. We needed advice on how to proceed, to act within the law, with things like redundancy notices and possibly going into administration. That was really helpful and equally I have spoken to the VAC employment advisor most recently drawing up a contract for a consultant. There was situation where we were taking on a sessional staff member so there was advice needed on taking someone onto the payroll. We got advice on the contract and what the entitlements should be and things like that. I know that sort of advice is always on the end of the phone. That’s always been such a help.

Q. Could you talk about the recent work you did on the business plan and why that was needed?

VAC’s Executive Director talked with us about developing a five year strategic business plan to help make the transition from receiving core funding from the council to being financially independent. We lost 100 per cent of our funding in 2011 although we able to arrange transitional funding at a much reduced level.

What happened was in 2007 a funding cut decimated the staff team, all the redundancy notices were issued and then at the eleventh hour we were able to raise the amount we lost but only for one year. Unfortunately our staff had moved onto other work by that time and I was the only staff member left.

We spent 2007-11 trying to piece it back together, build it back up to where we could provide services again. We had no staff so that period was spent using contract staff and getting the services back in place. We were buying in people as and when we needed.

Up till 2007 we had been running on a small deficit. We had become a very strong team. There hadn’t been a staff change in six years. We were a really solid team. But when you have such a strong team in a charity it means you have no slack in terms of funding. We were people rich and money poor so that’s why that initial 25% cut was hugely significant. It was a case of trying to build the services back up and at the same time get into a stronger financial position.

By 2011 we were looking at trying to get more staff but then we had a 100% funding cut so we were back to survival again. We felt getting a business plan was absolutely crucial. We had to look at every possible scenario in the climate of cuts and income changes and changes to benefits.

So the Executive Director of VAC led us through and facilitated that process of putting a business plan together. It was invaluable help and what that process involved all the staff, all our trustees, every member of the management committee, all our services, our partners and all the volunteers. Extremely thorough. We would not have had sufficient expertise to have done it all by ourselves. We needed that input and guidance.

It was really good to have that external facilitator that could help us to see the bigger picture, someone who could work with all of us and draw out all our contributions and help us to see from a different perspective. It had the benefit of getting us all on the same page. So by the end of that we were all really clear about what we were doing, why we were doing it, what the value of it was and where we needed to go and how to get there.

And it’s on-going relationship. Recently I submitted a funding application that required an external referee – someone who knows the work, knows the organisation but is not actually involved in it. And once again VAC has been able to provide that for us.

Q. What position would Doorstep be in without the support of VAC?

The relationship with VAC and their help with the business plan have put us in a much stronger position to put our case to funders. Because what we’ve had to do over the last eighteen months is work towards financial independence without any funding from Camden. Our awards over the last two years were 50% funding the first year and 25% this last year. And this funding was awarded through negotiation on the basis that we would have to be financially independent within 18 months.

Which we’ve pretty much done although…it’s ongoing, it’s relentless really. The largest amount of funding you’re likely to get as a charity from any funder is for three years for a particular aspect of your work, so it’s like a patchwork quilt. But it’s really useful to have the Plan because it strengthens our case and demonstrates to people that we’re professional organisation, that we know what we’re doing and know our strengths. We know how we want to develop and what our ambitions are. And that is reassuring to funders and shows that we looked at everything and are not just dreaming – that we have a strategic vision of what we are trying to do.

Q. How does the work you do with VAC make a difference to the people you work with?

VAC helps puts us in a better position to deliver services. It’s a good resource for information and making us aware of changes as they happen and the forums allow us to raise issues and give us a voice and articulate what our needs are. That’s not an easy thing to get organisations and people to do. Where service users have found it difficult to raise their voice we’ve been able to articulate their needs in these forums. Sometimes English isn’t their first language for instance or they may not have the confidence. And the forums influence policy – where we can go to the policy makers and tell them how policy is affecting people. By the time policy filters down to the ground it sometimes isn’t manifesting itself like they think it should be or is having a different affect than the one they thought- so the forums are essential to give people a voice.

Read our guide to business planning