The Rock ‘N’ Roll Rescue Charity Shop was opened in 2015 on Parkway in Camden Town and sells records, CDs, books, clothes, musical instruments and much more. 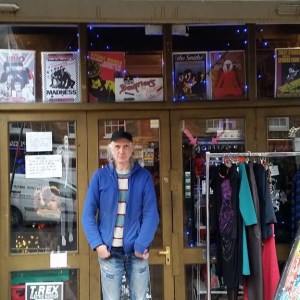 The shop’s founder Ian M Carnochan (aka Knox of the legendary band The Vibrators) talks about how he set up the shop and the support he got from VAC.

What VAC does seem to do is very worthwhile. When I went there it felt very good because it seemed very solid and very helpful. I feel I can always go there for advice and support.

Q. When you were starting the shop was VAC an early port of call for you?

I had a few things listed to go and talk to people about regarding the shop. VAC was one of the main ones. After I had gone and seen them I thought – well, they’re probably thinking I’m really mad. But somehow or other, here’s the shop!

What VAC does seem to do is very worthwhile. When I went there it felt very good because it seemed very solid and very helpful. I feel I can always go there for advice and support. That made me less worried about starting the shop here.

Basically I took a bit of a gamble I suppose. Knowing what I know now I might be a bit more cautious. I didn’t realise how much work was going to be involved and I’d be working myself to death! I’m always ever hopeful of getting things done but the reality is that when you’re in here you can’t get things done.

Q. How did you first hear about VAC?

Jenny Belle Star who runs the Hari Krishna Food for All charity shop on Caledonian Road mentioned VAC to me. She said if I went to VAC they’ll know how to get me started. I just wanted some advice on how you went about setting up a charity shop. Jenny hadn’t set up Food For All, she went in as a manager but she said VAC would be able to help me.

I had the idea for this kind of shop for at least five years. Because I’m known as Knox I thought of Knoxfam – Charity Begins at Home! Then I started to form this idea that there should be a rock and roll charity shop.

Q. The shop actually opened before the charity status. Was that about the time you came to VAC?

Yeah. Once I had the shop there was an awful lot of things to do about sorting out the charity status and having a business account. We still don’t have a proper business account for the shop. The money goes into our accountant’s account so it’s alright.

The charity status is a pretty involved process but the Charity Commission will help you through it. They’ll suggest things. Our accountant looked through all the paperwork and put forward the bits that we had to consider. He was immensely helpful because when you’re not familiar with that stuff and not sure what things mean, you might think you know what it means. Anyway he sorted all that stuff out and we sent off the paperwork. It took some time but eventually it came through.

One thing I didn’t foresee, as well as running a charity shop I’ve kind of had to become a frontline mental health professional. People come in and they’re not well. I think a lot of times you see aspects of these people that psychiatrists and counsellors might not see. These people keep some stuff well hidden. People say to me two months in the shop is like two months of East Enders.

Q. Are people talking about the cuts in mental health services in Camden?

I think that’s been catastrophic. We get people in here and you never know if they’re people who are victims of these cuts. Well, you’re in Camden and there’s a lot more homeless people sleeping rough. It’s very difficult because say you are a member of the government, you can get massive amounts of information. But I’m just in this shop or on my way home you see. You don’t really see what’s happening elsewhere in the borough. You just hear about things.

The shop is here because I felt that vulnerable people at the bottom of society – people who have had their dole money cut for two weeks and committing suicide for instance – they should be looked after. That was a very powerful reason for doing the shop.

We just get on with it and do what we can at our level. If we were able to have some kind of power I would stop what they are doing, for instance, dismantling of the NHS. You talk to people about it and they have all these targets they have to hit. And you kind of think – well they didn’t have that when I was a kid. It’s all different. If you under fund it then of course it’s not going to work that well. It’s very sad because I thought the NHS was the best thing Britain has ever done. Now they want to sort of destroy it.

The only advice I would give to people is get rich quick!

Q. Where have you made the charitable donations from the shop so far?

We’ve been giving money to the Trussell Trust Food Bank and to Jenny Belle Star’s Food for All Shop, the Hare Krishna people, they do food vans and tents and clothes for refugees in Calais. The Women’s Refuge up in Kentish Town. I also gave some money to a household that I knew up there who lost their mother a year ago. That just seemed really awful so it was just a bit of a Christmas for them you know? Also the Mayhew Cat and Dog Home.

One of the main things is we needed to have the scope to say where the money was going to go. We didn’t want to get hooked up with someone else. I mean the charity thing doesn’t make us any money whatsoever at the moment. Because we can’t get the savings on the business rates. But I always thought if we didn’t get the money we could do what we wanted with the money. But as a charity there are all sorts of rules to be followed.

Q. How do you decide who to support?

I just do it. I don’t think anyone disagrees. There’s probably lots of other charities – it’s just a matter of finding the time. We’ve had lots of letters from people asking for things and they’re all very good causes. Things like schemes to help kids from getting into crime that sort of stuff. There’s always a list of things and it’s a matter of sorting out how much money we have to give. I’d been hanging onto money for the first year because I’m new to this and in the back of my mind I was thinking – is there something I’ve forgotten? But it all seems kind of manageable.

My advice to anyone doing something similar is to get enough people to do it. Because if you don’t get enough people there’s quite a lot of things that need to be done and I don’t have the time or energy to do it all. You have to get a lot more volunteers involved. And if people are volunteering you can’t really boss them around. It’s a very, very heavy workload and basically it’s too much.

I was always thinking a rich pop star would come in and say “Anything I could do?” And I would say “Yeah, pay to have a shop manager.” Because that’s what most of the other places have. I think we could make a lot more money. But we’re still here.

We’re looking at other ways to make money. We were going to start selling stuff on eBay but the girl who was going to do that has an increasing workload. We have some high-end albums and stuff and the chances of a record collector coming past here are reasonably remote. Whereas you put it on eBay you might get five thousand people looking at it. So the person who would do that would get a percentage of the money. But if you’re hands on in the shop you basically don’t have the time or the energy to things like that.

Q. What did you envision it would be like before you started?

I just thought you’d get quite nice musicians messing about and I would cheerfully disappear into the background. There is all sorts of stuff I want to get on with and it’s more or less impossible to do it because of the shop.

That’s the life of the shopkeeper!

Read our guide on setting up an organisation